NATIONAL CONVENTION OF THE FRENCH REVOLUTION

Beginning in 1789, the French Revolution saw the French people overthrow their absolute monarchy and bring about a republic that was based on the principles of equality, liberty and fraternity.  Throughout the years of the revolution, there were four different revolutionary governments, including: National Assembly, Legislative Assembly, National Convention and the Directory.

The National Convention occurred from September 1792 until October 1795, during some of the most violent periods of the French Revolution.  It formed following the end of the Legislative Assembly and would later be replaced by the Directory.  The National Convention was extremely important to the events of the French Revolution.

First, the convention was the first government in France based on universal male suffrage.  All males 25 years and older were allowed to vote for representatives of the National Convention, regardless of their class in society. 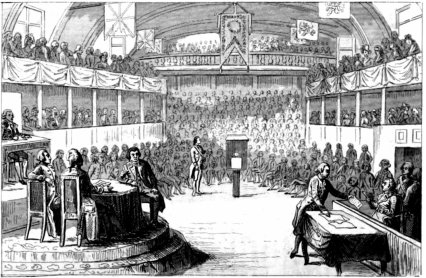 Second, the first major act of the convention was to abolish the absolute monarchy and to transform France into a republic.  This action helped lead into the trial and execution of Louis XVI, which was carried out by the National Convention.  While the early stages of the revolution were carried out by the moderates in the National Assembly and the Legislative Assembly, by 1792 it was firmly in the hands of the more radical National Convention.  On December 11th, 1792, the king was brought before the convention to hear the charges against him. He was charged with treason due to his attempt to flee the country earlier that year, which was viewed as him abandoning his country.  Next, on January 15th, 1793, the representatives voted and passed their verdict of guilty.  The famous revolutionary, Maximilien Robespierre, commented that “Louis must die so the nation may live.”  Louis’ punishment was death and on, January 21st, 1793, he was beheaded by guillotine.