Romulus and Remus are the twin brothers from Roman mythology that supposedly founded the city of Rome.

Romulus and Remus were born to Rhea Silva, a Roman princess and her husband, Mars, who was the mighty Roman god of war. When the twins were born, the king at the time became scared that they may grow up to overthrow him. As a result the king forced Rhea and Mars to leave the boys in a basket on the Tiber River in the hope that the twins would die, and therefore be unable to overthrow him. However, the twins survived because they were found by a she-wolf who raised and protected them. A woodpecker also helped the twins to survive by helping them to find food to eat. After some time, the twins were discovered by a shepherd who took them home and raised them as if they were his own children. 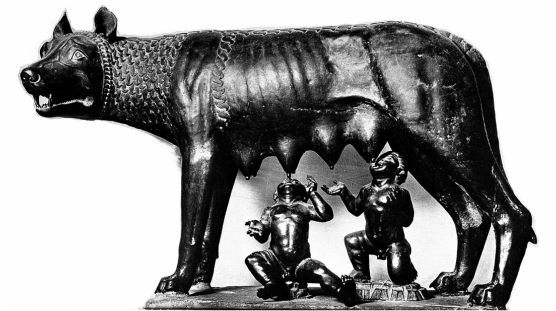 After a number of years with the shepherd, Remus was captured and taken to the king, who quickly discovered Remus’ true identity. Before the king could do anything to Remus, Romulus had gathered shepherds to rescue Remus. When Romulus and the shepherds arrived at the palace, they had to kill the king to rescue Remus. When the people in the city discovered who Romulus and Remus truly were, the twins were offered to become joint rulers over their homeland. However, the twins decided to turn the offer down because they wanted to found their own city. The twins then set out to find the perfect place to set up their new city.

Romulus and Remus came across an area of land that is now modern day Rome, and they decided that it was the perfect place to set up their new city. However, the twins could not decide on which hill to build their new city, with Romulus wanting to build the city on Palatine Hill while Remus preferred Aventine Hill. To help the twins decide where to build they waited for an augury or sign from the gods. The twins both saw groups of vultures on their hills, but unfortunately, the twins couldn’t agree upon who ‘won’.

Despite the disagreement, Romulus decided to start building his city, and so he started to erect a wall around his chosen hill. However, this made Remus angry, and jealous. As a result, Remus mocked Romulus’ wall and even jumped over the wall at one stage in order to show to Romulus that his city wall was easy to cross, and would therefore not keep his city safe. After being made fun of, Romulus killed his brother.

After Remus was killed, Romulus continued to build his city and officially founded it in 753 B.C. He became king and named his new city Rome after himself. After being founded, Romulus organized the city of Rome and developed a strong army. The city grew and grew, and expanded to cover a number of local hills, including Aventine hill which is the hill that Remus wanted to build his city on. Romulus mysteriously disappeared and some thought he was turned into a god. However, despite Romulus’ disappearance Rome continued to prosper and for over 1000 years Rome was one of the most powerful and mighty cities in the world.