AUSTRALIA IN WORLD WAR I

World War I was an important event in history for many different countries, including Australia.  While the war was primarily a European conflict, it ultimately became a global war due to the involvement of countries from around the world.  For example, Australia joined World War I in 1914 due to its status as a Dominion of the British Empire.  As such, Australian soldiers were present in many of the major battles in both Europe and the Middle East.​
​

World War I erupted during the summer of 1914 in an event that historians refer to as the July Crisis.  In short, this crisis was caused by the assassination of Austrian Archduke Franz Ferdinand, which led to the major European powers engaging in a conflict.  For example, Britain was pulled into the crisis due to its alliance with France and Russia, which was called the Triple Entente.  As stated above, Australia was considered to be a Dominion of the British Empire at time.  A ‘dominion’ is considered to be a partially independent nation under the wider control of the vast British Empire.  At the time, the status of ‘dominion’ was given to several nations or regions within the British Empire, including: Australia, Canada, New Zealand, Newfoundland, and South Africa.  Due to being a Dominion of the British Empire, when Britain declared war on August 4th, 1914, Australia was also automatically pulled into the fighting of World War I.​

AUSTRALIA'S ARMY IN WORLD WAR I

Australia’s enthusiasm to participate alongside Britain in World War I, meant that it needed to quickly gather supplies and build up its army.  As such, Prime Minister Joseph Cook created the Australian Imperial Force and the Australian Naval and Military Expeditionary Force.  The Australian Imperial Force was created on August 15th, 1914, and was the main armed forces that Australia deployed in the timeframe of World War I.  These forces served in battles across Europe and the Middle East.  The Australian Naval and Military Expeditionary Force formed shortly after Australia’s entry into World War I and focused on military operations in Germany-controlled New Guinea.  It consisted of a force of about 2,000 Australian men and carried out missions in New Guinea to prevent Germany from using wireless stations in the region, which were important to German naval forces.  While the forces of both the Australian Imperial Force and the Australian Naval and Military Expeditionary Force were initially quite small, over 413,000 Australians eventually participated in the war effort.​
Australia played a significant role in the fighting of World War I.  The war was primarily a European conflict, as it involved the major European powers of the time including: Austria-Hungary, Britain, Bulgaria, France, Germany, Ottoman Empire and Russia.  When war broke out in 1914, there were two sets of alliances.  First was the Allied Powers, which included Britain, France and Russia.  Due to its status as a Dominion of the British Empire, Australia participated alongside these other powers.  On the other side was the alliance of the Central Powers, which included Austria-Hungary, Bulgaria, Germany and the Ottoman Empire.  These nations were the major enemies that Australia and the other Allied Powers faced off against in the battles of World War I.​

The Australian Imperial Force (AIF) participated in several of the main battles in Europe and the Middle East.  In general, the landscape of Europe in World War I was divided into a few different ‘fronts’.  For instance, the Western Front was located on the western-half of Europe and included a line of trenches that stretched throughout much of northern France and Belgium.  The Eastern Front of World War I was on the eastern-half of Europe and between Germany and Russia.  Australia’s participation in World War I focused on the Western Front and campaigns in the Middle East and southeastern Europe.  They also carried out missions on German-controlled New Guinea in the South Pacific Ocean.
​
The major battles and campaigns of World War I that Australia participated in included:
More specifically, Australia formed the Australian Naval and Military Expeditionary Force (AN&MEF) and used it as its force to carry out attacks in New Guinea.  The Australian Naval and Military Expeditionary Force was made up of a force of about 2000 Australian men and led by Colonel William Holmes.  They carried out a series of raids against German-held islands and destroyed the necessary radio stations.  For example, the Australians carried out the Battle of Bita Paka and the Siege of Toma in September of 1914.  Following the capture of the islands, the Australian Naval and Military Expeditionary Force occupied the islands for the remainder of World War I and prevented Germany from regaining control in the region.​
The goal of the Gallipoli Campaign was for the Allied Powers to weaken the Ottoman Empire, which exerted a great deal of influence in the southeastern areas of Europe.  For instance, the Allied nations wanted to secure waterways in the area in order to ensure that the Ottoman Empire did not prevent necessary shipping routes, especially to Russia.​
Australian forces first arrived in Egypt in November of 1914 by ship.  While there, they defended the Suez Canal against Ottoman attack.  The Suez Canal was a vitally important trade route that the British controlled as part of their British Empire.  At the same time, Australian forces trained and readied themselves for battle on the Western Front of Europe. In fact, during this period, the Australian Army and the New Zealand Army combined to form the Australian and New Zealand Army Corps (ANZAC) under the command of Lieutenant General William Birdwood.  The ANZAC forces became a significant fighting force in World War I.  It was believed that ANZAC would participate alongside other British forces in northern Europe.  However, the threat of the Ottoman Empire in southeastern Europe caused ANZAC to first deploy there instead.  For instance, Winston Churchill argued for an Allied naval attack against the Dardanelles.  At the time, Churchill was the First Lord of the Admiralty, for the British Royal Navy.​ 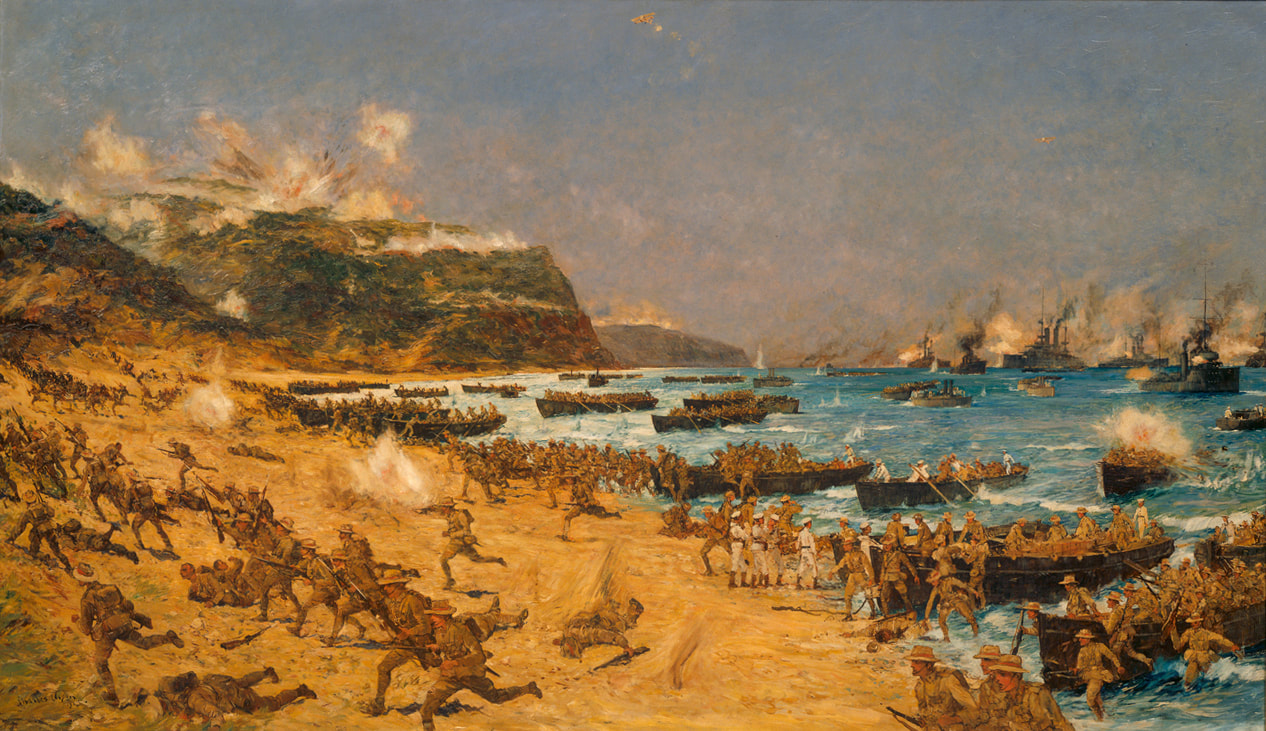 As in other countries, World War I had a profound impact on the home front nations involved, including Australia.  More specifically, Australia saw tremendous impacts on the life of those people that stayed in Australia during the duration of World War I.​
The first main aspect of World War I on the Australian home front was the impact on Australian women.  With many of the men gone to serve in the Australian Army during the war, women were tasked with maintaining life for families on the home front.  As such, Australian women took an increased role in the affairs of their families and the everyday life of Australians at home.  For example, many Australian women volunteered for service in hospitals.  They also helped support the war effort in other ways, such as supplying the troops overseas with goods from home.  For instance, several women’s organizations played an important an important role in assisting the Australian war effort.  Examples of these groups included: Australian Women’s National League, Australian Red Cross, Country Women’s Association, Voluntary Aid Detachment, Australian Women’s Service Corps, and Women’s Peace Army.  For example, these groups led different types of campaigns in which they sent different types of goods to the Australian troops on the front lines of World War I.​
In order to promote recruitment for World War I and other initiatives, the Australian government of the time used propaganda to convince citizens of certain messages.  For example, the government issued propaganda that worked to recruit soldiers for the war, ration certain items and to demonize the enemy.  Australian citizens on the home front were subjected to constant messaging to ensure they supported the war effort and to maintain the push towards victory.  The propaganda from World War I included different types of posters, radio addresses, and leaflets.​
Another major impact on the Australian home front was the government.  The Australian government experienced several significant changes throughout the timeframe of World War I.  For instance, Australia experienced a great deal of political change during this time and saw power shift from one political party to another.  More specifically, at the outbreak of the war in 1914, Prime Minister Joseph Cook of the Commonwealth Liberal Party led Australia.  However, he was defeated in an election in 1914 by Andrew Fisher of the Australian Labour Party.  Fisher served as Prime Minister for just over a year, until he was replace by William ‘Billy’ Hughes.  Hughes was also a member of the Australian Labour Party and served as the 7th Prime Minister of Australian throughout the remainder of World War I.​
The first referendum failed by a slim margin of 49% to 51%.  As such, conscription was not adopted in Australia.  Furthermore, the results of the first referendum, caused a political upheaval in Australian politics.  For instance, It caused the Australian Labour Party to split and Prime Minister Hughes formed a new party called the Nationalist Party of Australia.  In the 1917 election, the new Nationalist Party won and Hughes retained his role as the Prime Minister of Australia.  This eventually led to another referendum over the issue of conscription.  The second referendum was held on December 20th in 1917 and asked Australians to consider the following question:​
‘Are you in favour of the proposal of the Commonwealth government for reinforcing the Australian Imperial Force oversea?’
This referendum failed as well, with a result of 46% to 54%.  As a result, the issue of conscription in Australia during World War I was ended.  Regardless, the close results of the two referendums highlighted the controversial nature of the conscription as an issue and the impact it had on the home front of Australia during World War I.​

SIGNIFICANCE OF WORLD WAR I FOR AUSTRALIA

World War I was an important moment in the history of Australia.  First, and foremost, over 413,000 Australians served during World War I, and represented their country bravely on the battlefields in New Guinea, the Middle East and Europe.  As well, approximately 62,000 Australians died as a result of military action during the war.
While this fight for sovereignty was relatively short-lived (Australia remained in the British Empire after World War I), Australia experienced a larger sense of national identity from its role in the war.  For instance, the war and the number of dead had a profound impact on how Australians viewed themselves.  After the war ended, numerous monuments were built across Australia to honor the soldiers who served and died in World War I.  This was important to Australia sense of self at the time and help establish an identity for the maturing nation.  As such, World War I was a defining moment in Australia’s history and led to an increase in Australia’s sense of nation identity.​