ITALY IN WORLD WAR I

Italy was an important nation in the events of World War I.  As a country, Italy was involved, to some extent, in the events that led to the outbreak of the war in 1914 and in some significant battles of the war.  For example, before the start of World War I, Italy was closely allied with both Germany and Austria-Hungary as part of the Triple Alliance.  However, when the war began in 1914, Italy aligned themselves with the Allied Powers of Britain, France and Russia.  While World War I is most often known for the battles and conditions of the trenches on the Western Front, Italy was an important contributor to the war on the Italian Front (also known as the Alpine Front).
​

This was significant for the Allied nations because it weakened the fighting capabilities of the Central Powers and helped force Austria-Hungary to devote a certain portion of their forces to fight Italy along their shared border.  By the end of the war, Italy had mobilized over 5.6 million soldiers.​

ITALIAN ARMY IN WORLD WAR I

Italian forces participated in many of the main battles of World War I, but were primarily active on the Italian Front (also known as the Alpine Front).  In general, the landscape of Europe in World War I was divided into a few different ‘fronts’.  For instance, the Western Front was located on the western-half of Europe and included a line of trenches that stretched throughout much of northern France and Belgium.  Whereas the Italian Front was along the border between Italy and Austria-Hungary.  At the time, Italy wanted to gain control over sections of the region due to a rising sense of nationalism.  The terrain of the region was very mountainous.  As such, many of the battles that Italy participated in occurred on mountain ranges and in valleys.
​
As stated above, Italian forces participated in many battles of World War I.  Some of the most significant battles of World War I that Italy participated in included: 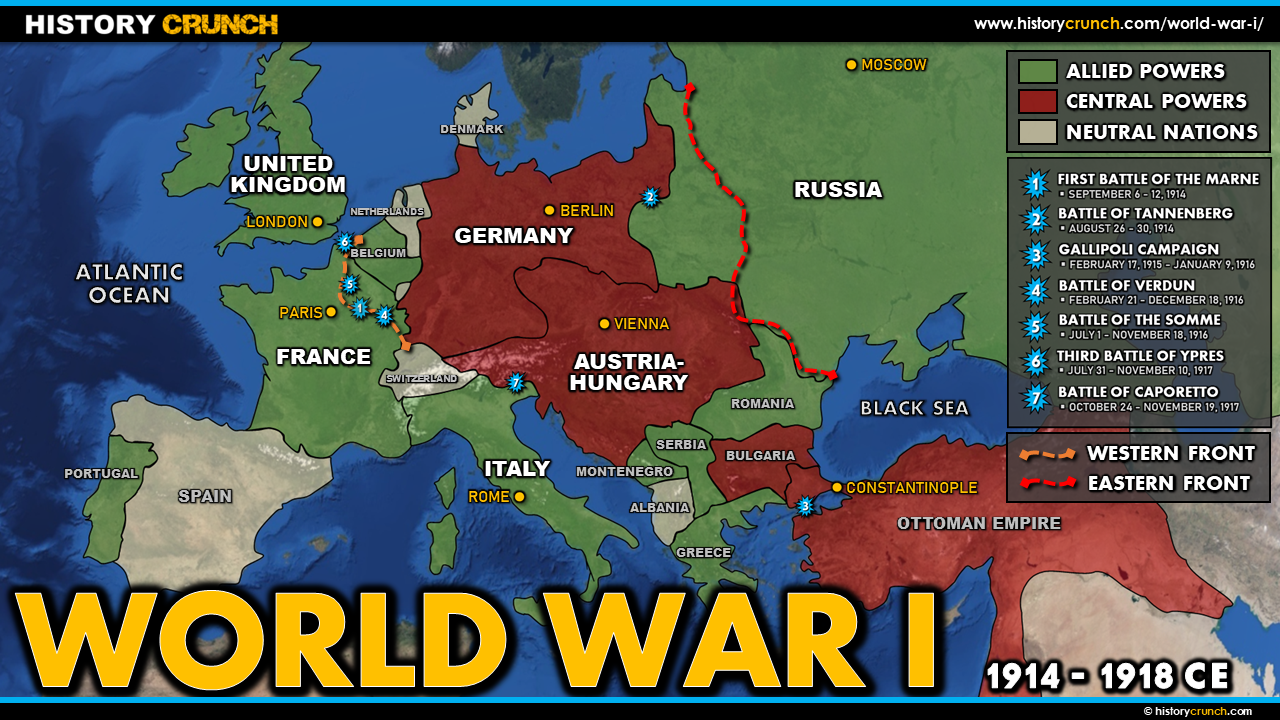 An important aspect of the First World War for all of the countries involved was the impact it had on the home front.  This was also evident in Italy, which experienced impacts on daily life for Italian citizens.​
A major factor on the Italian home front was the support, or lack thereof, for the war effort and Italy’s role in it.  Italy had originally been a member of the Triple Alliance along with Austria-Hungary and Germany.  However, when the war broke out in 1914, Italy remained neutral and did not join the fighting until 1915.  During this time, debate raged within Italy on the merits of joining the war.  Most Italian citizens did not want the country to go to war and feared what a prolong war would do to the country.  On the other hand, the government and certain nationalist factions supported the war, as they wanted to capture more regions to the north that they believed was traditional Italian territory.  This divide in public opinion created a tense political situation in the country in the lead up to the war.  Regardless, Italy joined the war effort in 1915 on the side of the Allied nations, which included Britain, France and Russia.

SIGNIFICANCE OF WORLD WAR I FOR ITALY

World War I was a highly important event in the history of Italy.  First, and foremost, over 5.6 million Italian soldiers served during World War I.  As well, approximately 651,000 Italian soldiers died as a result of military action during the war.​
Second, the terrible losses suffered by Italy were characteristic of the overall nature of the fighting in World War I.  The mountainous terrain that the Italian forces fought in was highly unique and led to several significant battles.​
Beyond this, World War I was highly significant for the country of Italy due to its calls for increased territory.  Nationalists in Italy wanted the country to gain control over more territory on its northern border that had previously been controlled by the Austro-Hungarian Empire.  At the end of the war, Italy sought to gain access to this land and argued for more control in the region.  In fact, some of Italy’s frustrations at the end of World War I was due to it not receiving control over more of these new territories.  This led to further increases in Italian nationalism and the rise of more extremist forms of nationalism.  For example, Benito Mussolini and his fascist ideology rose to prominence in Italy in the early 1920s, just after the end of World War I.​