Julius Caesar is one of the most important figures in the history of the Roman Republic and Roman Empire.  Caesar was a prominent politician, military general and leader in Rome, and had a profound impact on its history.  In fact, he is one of the most famous Roman leaders from the time period of Ancient Rome, especially in relation to his rise to power and eventual assassination.
​

​It wasn’t until 76 BC that Caesar thought it was safe enough to return to Rome, following the death of Lucius Cornelius Sulla.  Sulla was a prominent figure in the earlier mentioned civil war, and openly criticized Julius Caesar and his allies. When Caesar returned to Rome, he moved into a neighborhood of Rome called Subura.  Here he began working as a legal advocate and gained a reputation for his speaking skills.

RISE TO POWER OF JULIUS CAESAR

​Caesar began his rise to prominence in the political scene of Ancient Rome when he was elected military tribune.  In Ancient Rome, the position of military tribune was an officer of the Roman Army, and was oftend held by Roman men before they entered the Roman Senate.  In that same year (69 BC) Julius Caesar was also elected as quaestor, which was another prominent position in the Roman Republic.  It was also this time that his wife, Cornelia, died.  He was then briefly married to Pompeia, a granddaughter of Sulla.  However, they divorced in 61 BC.
​Julius Caesar continued his rise to power in 63 BC, when he was elected to a magistrate position called a curule aedile.  He used this position to stage a set of games that were grand in nature.  In Ancient Rome, public games of entertainment were referred to as ‘Ludi’ and where often held in large amphitheaters.  These types of games often included horse races, and theatrical competitions.  When Caesar staged these games as the curule aedile, he gained widespread support from the Roman people and improved his standing and popularity in the Roman Republic.  As such, when he ran for the position of Pontifex Maximus in 63 BC, he won easily against two other rivals.  The Pontifex Maximus was the highest position in the Roman religious structure and gave Caesar a much higher standing in the Roman Empire.

​The First Triumvirate was an informal alliance between Julius Caesar, Marcus Licinius Crassus and Gnaeus Pompeius Magnus.  Caesar and Crassus were still connected from when Crassus helped Caesar handle his many debts just a few years earlier.  Gnaeus Pompeius Magnus (or just ‘Pompey’) was an influential military and political figure in the Roman Republic.  In fact, Pompey and Crassus had clashed earlier in their lives, but Caesar saw the opportunity to unite them together, along with himself, to create a powerful alliance.  This alliance was further strengthened when Caesar’s daughter, Julia, married Pompey.  Julia was Caesar’s daughter from his first marriage to Cornelia.  The alliance of the three men became known as the ‘First Triumvirate’.  Their combined wealth and political power made them a formidable force at the time.  For instance, they used their influence in the army to intimidate their rivals and enemies in the Roman Senate.
​

​Soon after the establishment of the First Triumvirate, Julius Caesar was made governor over Gaul, which was a region in northern Italy and modern France.  While there, he commanded four legions of the Roman Army and used them to conquer larger sections of territory for the Roman Republic.  In fact, Caesar and his armies conquered tribes throughout modern France, Germany and Belgium.  With these lands conquered, he launched an attack against Britain by crossing the English Channel.  He made inroads into Britain but struggled to make any major gains.  However, at the same time that he was in Britain, his daughter Julia died while giving birth.  This was significant because Julia was married to Pompey, Caesar’s ally in the First Triumvirate.  With the death of Julia, Caesar realized that the alliance of the First Triumvirate was weakened.  This was made worse with the death of Crassus in 53 BC and the marriage of Pompey to the daughter of a political rival to Caesar.  In reality, Pompey was worried about the growing strength and influence of Caesar due to his many victories in Gaul.  All of this combined to cause the end of the alliance of the First Triumvirate.
​Despite the chaos back in Rome, Julius Caesar remained in Gaul and carried several major conflicts against the Gallic tribes.  These conflicts included the Battle of Gergovia and Battle of Alesia in 52 BC.  With the battle of Alesia, Caesar defeated the last of the Gallic resistance in Gaul and focused his attention on Rome and Pompey.
​

​While Caesar had been in Gaul, Pompey had effectively gained control of the Roman Senate and enjoyed a considerable amount of power.  Pompey used that power in 50 BC to order the return of Julius Caesar to Rome.  Caesar was suspicious of Pompey’s intent, as he had also ordered Caesar to disband his army in Gaul before returning.  In return, Pompey had the Roman Senate formally accuse Caesar of treason and a new civil war erupted for the power over the Roman Republic.
Caesar responded to Pompey’s challenges in 49 BC when he had his army cross the Rubicon River, on the northern border of Italy, and launch an attack against Pompey and the Senate.  Caesar’s soldiers quickly moved south through the Italian Peninsula and overwhelmed Pompey and his own army.  This caused Pompey and his supporters from the Roman Senate to flee to Spain with his remaining soldiers.
​Caesar wasted no time, and left Rome with his own armies in pursuit of Pompey.  While he was gone, Caesar left Rome under the leader ship of one of his allies – Mark Antony.  Caesar and his armies arrived in Spain just 27 days later after a grueling march and set straight away to battling and defeating Pompey’s forces.  Caesar then travelled to Illyria, which is modern Greece, in search of Pompey.  In Illyria, the forces of Caesar and Pompey participated in a series of battles that ultimately ended the civil war.  First, Caesar and his soldiers were nearly defeated at the Battle of Dyrrhachium on July 10th, 48 BC.  Pompey led his forces at the battle but failed to deliver the decisive blow to Caesar.  As a result, later that summer, on August 9th, Caesar and his army defeated Pompey’s forces at the Battle of Pharsalus.  Pompey survived the battle and fled to Egypt.  Caesar returned to Rome a victor and was appointed the dictator of Rome, but did not stay long as he soon left for Egypt after Pompey.

​As stated above, Caesar followed Pompey to Egypt in 48 BC.  When he arrived, Caesar was presented with the severed head of Pompey from the Pharaoh of Egypt - Ptolemy XIII.  The pharaoh had Pompey assassinated, likely as a gesture to gain favor from Caesar.  However, despite being his rival for many years, Caesar was horrified when he saw Pompey’s severed head.
​After his victory in Egypt, Caesar fought several more battles throughout the Middle East and Africa.  These battles focused on finishing off the last of Pompey’s supporters and consolidating even more power in the hands of Caesar.  When he returned to Rome in 46 BC, he more powerful than he had ever been and appointed dictator of the Roman Republic again.

​As stated above, Julius Caesar was appointed the dictator of the Roman Republic in 46 BC.  In fact, his term as dictator of Rome was for a period of ten years.  In general, Caesar was celebrated by the people of Rome when he returned and assumed command of the government.  With that said, he still had many political rivals, and his appointment of ten years angered many.
​While many of his reforms were popular, there still remained an element of political opposition for Caesar in the Roman Senate.  In fact, Caesar carried out a series of actions that worried other prominent Roman politicians.  For instance, he limited the powers of the Senate and arranged the political structure of Rome such that he gained more authority.  In fact, he had himself made dictator of Rome for the rest of his life in 44 BC.  Furthermore, he began to project an image of himself that his rivals likened more to a King.  This angered many in the Roman Senate, as they resented the types of authority associated with monarchs.  As a result, this led to a growing sense of anger among members of the Roman Senate, which led to the eventual assassination of Julius Caesar.

​Julius Caesar was assassinated on March 15th in 44 BC (which was the ‘Ides of March’ in the Roman calendar) by rivals in the Roman Senate.  More specifically, the assassination of Caesar was planned and carried out by three main Roman senators: Marcus Junius Brutus, Cassius Longinus, and Decimus Brutus.  Upset with Caesar’s authority, they arranged to assassinate him during a session of the Roman Senate on March 15th.   When he arrived in the Senate, approximately 60 angered senators surrounded him and began stabbing him with daggers.  It was recorded that Caesar was stabbed 23 times.  He was 55 years old when he died. 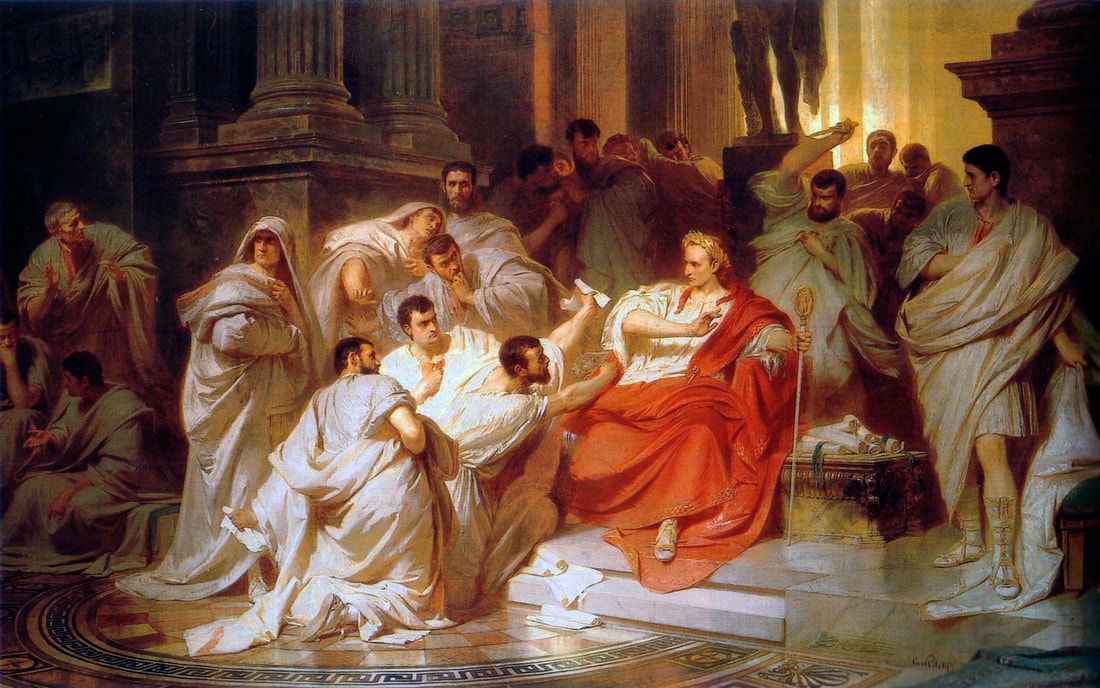