SHELL SHOCK IN WORLD WAR I

CAUSES OF SHELL SHOCK IN WORLD WAR I

Life in the trenches of World War I was miserable and difficult for the soldiers that had to endure the horrible conditions.  From the mud, rain, rats, and the constant threat of enemy attack, life in the trenches was not easy.  What made it even more miserable was the artillery shelling that soldiers in the trenches had to live through.  The use of artillery in World War I was common and some estimates put the total number of artillery shells fired in World War I as high as 8 billion.  Artillery bombardments could last days and weeks before infantry forces undertook an attack across ‘No Man’s Land’.  Soldiers in the trenches would stay low in the trenches as the shells exploded around them.  This put the soldiers in the trenches in a difficult situation as they sat in a constant sense of suspense and anxiety.  At any moment, they could have a shell land on top of their position or next to them and potentially bury them under mud and dirt.  Still today, soldiers from World War I are being unearthed on the former battlefields of the war and it is determined that many of them were buried alive by dirt that was thrown on top of them from an artillery blast.  During the night, the shelling would have been particularly difficult to endure as soldiers could only hear the explosions around them and the flashes of light from the artillery fire would briefly and chaotically light up the trenches.​ 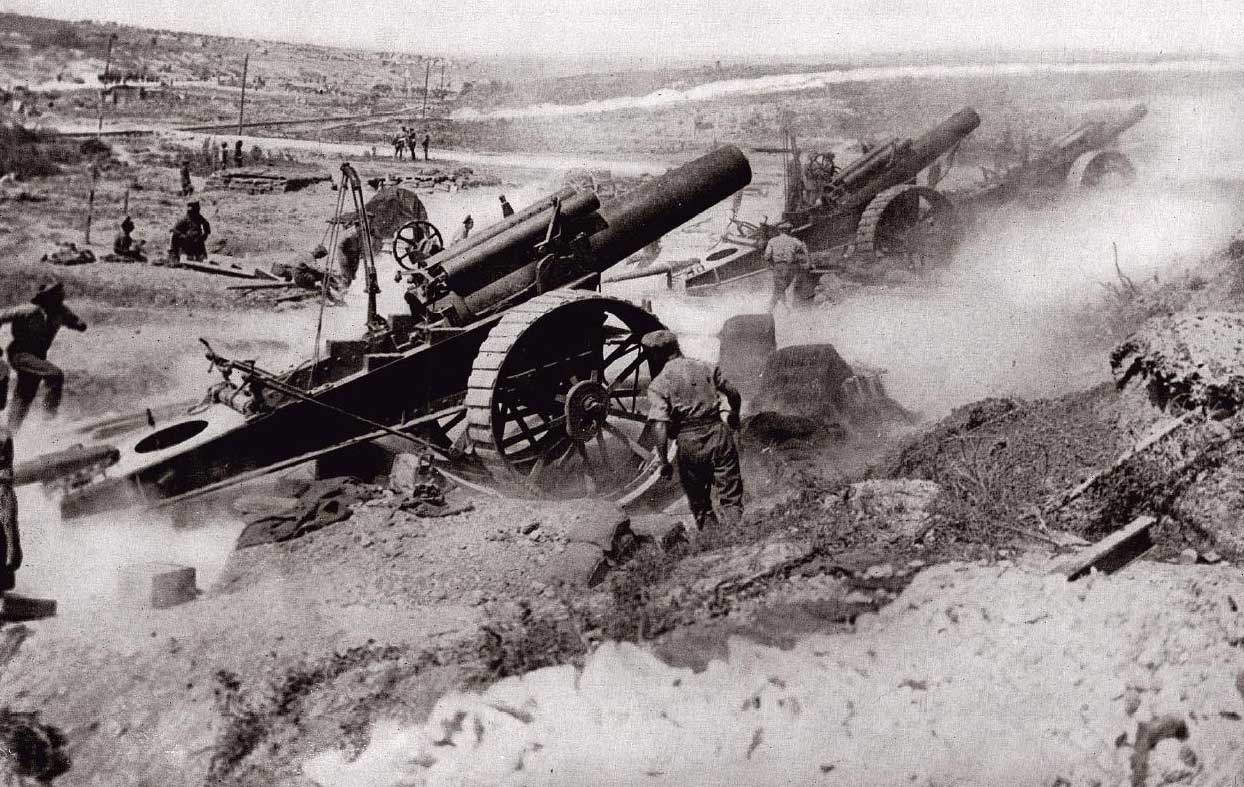 Artillery played an important role in World War I, but also led to the effects of 'Shell Shock' for the soldiers. This image shows British artillery gunners during the Battle of the Somme on the Western Front.
For example, in his book ‘All Quiet on the Western Front’, Erich Maria Remarque, a German veteran of World War I described the situation facing World War I soldiers.  He stated, “We wake up in the middle of the night. The earth booms. Heavy fire is falling on us. We crouch into corners. We distinguish shells of every calibre.  Each man lays hold of his things and looks again every minute to reassure himself that they are still there. The dug-out heaves, the night roars and flashes. We look at each other in the momentary flashes of light, and with pale faces and pressed lips shake our heads.  Every man is aware of the heavy shells tearing down the parapet, rooting up the embankment and demolishing the upper layers of concrete. When a shell lands in the trench we note how the hollow, furious blast is like a blow from the paw of a raging beast of prey”.​
​The continual shelling and the ever-present sense of fear and dread that the soldiers experienced led to a medical condition called ‘Shell Shock’.  Soldiers used the term to describe those who were overcome by fear and seemed to act in an ‘insane’ manner.  As such, Shell Shock was the result of life in the trenches for the soldiers and the continual stress and anxiety created by constant artillery bombardments.  Today, this condition is known as post-traumatic stress disorder (PTSD), and is often associated with soldiers who have experienced difficult aspects of war.
​In more recent medical studies, some researchers have showed a potential link between the blast waves from the artillery shelling and the outcomes or severity of Shell Shock.  For instance, they argued that the soldiers of World War I that showed symptoms of Shell Shock suffered from brain injuries that were caused by blast waves.  Constant exposure to blasts from artillery shelling led the brains of the soldiers to become injured from pressure changes and other stimuli.  The researcher argued that the brain injuries may have led to the effects of Shell Shock being more severe.

SYMPTOMS & TREATMENT OF SHELL SHOCK IN WORLD WAR I

As stated above, Shell Shock was a medical condition that resulted from the horrors of life in the trenches.  Soldiers who were diagnosed with Shell Shock displayed symptoms such as: fatigue, tremors, confusion, nightmares and impaired sight and hearing.  Additionally, soldiers from World War who were diagnosed with Shell Shock also presented with confusion or anxiety to certain noises and sights.  In general, medical doctors of the time did not understand the condition and assumed it was caused by prolonged exposure to the explosions of artillery shells.  Many soldiers were treated for the condition and the treatments ranged from the caring to the cruel.  For example, some soldiers suffering from Shell Shock would take therapy sessions wherein they would talk about their issues, while others were given electroshocks as treatment.  The electroshock therapy was used as a means of hopefully stimulating the brain back to a state before the onset of the condition.  Regardless, the medical profession struggled to understand the cause and effect of Shell Shock until much later.

IMPACTS OF SHELL SHOCK IN WORLD WAR I

​Today, Shell Shock is often referred to as Post-Traumatic Stress Disorder (PTSD) and it now widely understood as a condition of the exposure to the horrors of war.  Soldiers with PTSD struggle to cope with everyday life after having lived through a long period of extensive fighting and the continuous fear and anxiety caused by war.  Since PTSD, as a condition, was not understood until much later in the 20th century, many soldiers from World War I went undiagnosed or misdiagnosed and did not receive the treatment they needed to help them when they returned home from fighting.  As such, Shell Shock had a terrible impact on the lives of the individual soldiers, which were afflicted by it.
In a broader sense, Shell Shock impacted World War I in that it sidelined many soldiers.  For instance, as World War I carried on through 1915 and 1916, it led to numerous soldiers being unable to continue fighting or being limited in their ability to fight.  More specifically, at the Battle of the Somme in 1916, which was one of the biggest battles of World War I, the British reported as many as 40% of their fighting force being sidelined due to the effects of Shell Shock.  This obviously created an issue for the army as they attempted to continue the fight along the trenches of the Western Front.