The Columbian Exchange is one of the most significant events in all of world history.  It led to a major transformation between the New and Old Worlds that fundamentally changed the way of life for people across the entire world.
When Christopher Columbus set sail to the Americas in 1493 on his second voyage he brought with him many seeds, plants and livestock.  This cargo started a 'grand exchange' and revolution between the New World and the Old World that would alter the world forever because he had brought with him seeds, plants and livestock that were not originally occurring in the New World.  This exchange would be called the 'Columbian Exchange' by historian Alfred Crosby.  The major exchange between the two worlds centered on the exchange of plants, animals, and diseases.  Although the exchange began with Christopher Columbus it continued and developed throughout the remaining years of the Age of Exploration.  Ultimately the Columbian Exchange impacted the social and cultural makeup of both sides of the Atlantic and dramatically impacted the people living in these regions.  The information below details the exchange that occurred between the New and Old World as related to plants, animals and diseases.

PLANTS EXCHANGED IN THE 'COLUMBIAN EXCHANGE'

The plants involved in the Columbian Exchange dramatically changed both the economy and culture of the New and Old Worlds.  European explorers returned home with New World plants, such as: beans, squash, chili peppers, sunflowers, peanuts, tomatoes, sweet potatoes, avocado and pineapple.  However, the two most important New World plants were the potato and maize (corn).  They would eventually have profound effects on the Old World and modern peoples.
Maize (corn) is an important New World crop involved in the Columbian Exchange.  It was always important to the societies of Central America because it could be dried and stored for long periods of time.  It was easily transported to Europe because of its adaptable nature and would eventually be grown in many different regions around the world.  The introduction of maize into the Old World, along with other New World foods, led to a population growth as the new foods helped support larger societies.
Potatoes are native to South America but were transported to the Old World where they would become a key component of the diet of many Europeans for years to come.  The potato was important because they could resist cold temperatures and grow in relatively thin soil.  Specifically, the potato would be vital to Ireland in particular and by the 19th century, Ireland was so dependent on the potato as a source of food that the “Irish Potato Famine” in the 1840’s and 1850’s caused mass starvation and emigration from Ireland.  Approximately two-fifths of the population was solely reliant on the potato as a source of food, and when a potato disease destroyed the crops it had dramatic effects for Ireland and Irish people.  Ireland’s population dropped approximately 20% to 25% between the years of the famine.
Many Old World plants were brought to the New World and would have a dramatic impact on the Americas.  Most importantly, Old World crops like wheat and barley became staple growing crops on the American prairies.  A more specific example of an Old World crop was the sugarcane.  The sugarcane was a very significant crop historically.  Christopher Columbus introduced the crop to the Caribbean on his second voyage to the Americas.  The new crop flourished in the New World with sugarcane plantations being developed in Cuba, Puerto Rico and Jamaica.  Sugar today is used in many foods and has since become one of the largest cash crops in history.
Coffee had been grown in Africa and the Middle East before it was transported to the Americas.  Once in the New World, coffee became an important new crop in Central and South America.  It has continued to be an important crop of the region due to its ability to grow easily in the climate of Central and South America.   Today coffee is a popular drink around the world.

ANIMALS ​EXCHANGED IN THE 'COLUMBIAN EXCHANGE'

Animals were another key component of the Columbian Exchange.  The animals were transported by European sailors aboard early ships and would quickly impact the societies and environment of the Americas.  The differences between the animals in the New and Old Worlds were dramatic with the indigenous peoples of the Americas only having a few animals for use.  For example, indigenous peoples on the New World had only domesticated the dog, and llamas.  Prior to the Columbian Exchange, the Americas had no major beasts of burden (work animals) and therefore all manual labor had to be completed by human hands.  On Columbus’ second voyage in 1493 he brought a variety of Old World livestock, including: horses, pigs, sheep, dogs, cattle, chickens, and goats.  When explorers brought new animals across the Atlantic, it introduced a whole new means of transportation, a new labor form, and new sources of food.
Pigs were extremely successful in the New World after being introduced by early European explorers and became very important to the Americas.  For example, the pigs reproduced very fast and were able to serve as meat for early explorers and other societies.  Specifically, Hernando de Soto brought thirteen pigs with him to Florida an within three years the pigs had reached a population of over 700.
Horses were extremely plentiful in Europe, especially in Spain and Portugal.  The first horses arrived in the Americas with Columbus aboard his second voyage in 1493.  The early European explorers brought horses across the Atlantic despite the difficulties of the voyage because horses served such an important function in the life of Europeans.  The explorers used the horse successfully in battle against the indigenous peoples of the Americas and were tremendously helpful because the indigenous cultures had never experienced an animal as large as a horse in battle before.  Horses today are common in the Americas and exist both as a work animal for humans as well as a wild animal. 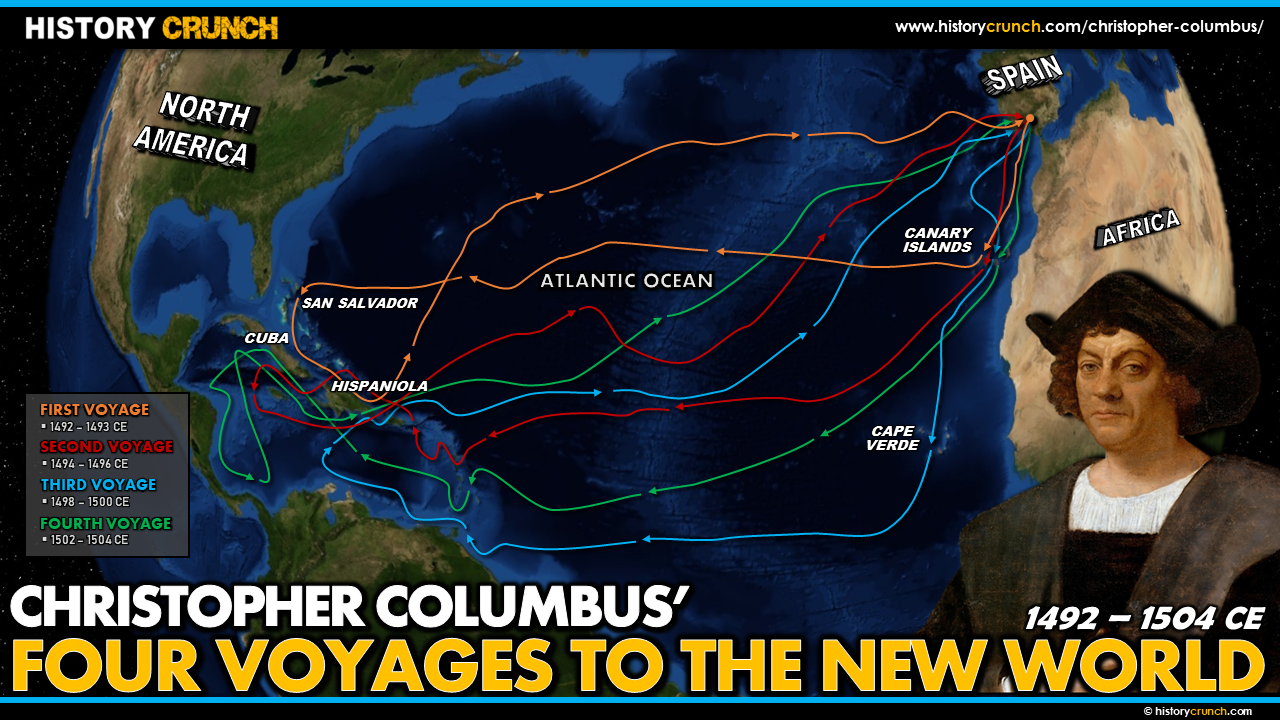 DISEASES ​EXCHANGED IN THE 'COLUMBIAN EXCHANGE'