The crusades are one of the most significant events in the history of Europe and the Middle East.  They were a series of religious wars carried out by Christian crusaders from Europe during the timeframe of the Middle Ages.  Beginning in 1095 CE, the crusades saw European knights and noblemen travel to the Middle East in an attempt to capture the Holy Land away from Muslim people that had controlled the region for the previous centuries.  The term crusade means ‘cross’.  Therefore, the Europeans that became crusaders viewed themselves as ‘taking up the cross’.  In fact, many of the crusaders wore crosses on their clothing and armor as they made their pilgrimage to the Holy Land.
​

CAUSES OF THE CRUSADES

Historians consider this speech to be the event that sparked the first crusade and began the movement of European Christians into the Middle East.  There were several key reasons for the pope to call for the crusades.  First, the Byzantine Empire (which was the remains of the former Roman Empire) was under attack from Muslim Civilization to the east.  Since, the Byzantine Empire was centered in Eastern Europe and parts of the Middle East it was in direct contact with other eastern civilizations and they often clashed.  Second, the Roman Catholic Church wanted to secure and protect Christian churches and holy sites in the region and sought soldiers to help.  Third, Islam emerged in the 7th century in the Arabian Peninsula and quickly spread to surrounding areas, such as: Northern Africa, the Middle East and Europe.  The Roman Catholic Church felt that Christianity was under attack from the spread of Islam and the crusades represented an attempt to stop it from spreading into European strongholds.  Fourth, the city of Jerusalem, which was the center of the main conflict of the crusades, was considered to be important territory for Christian faith (and also Muslim and Jewish faith).  As a result, many Christians wanted it ‘freed’ from Muslim control and sought to gain control over the area for religious and territorial reasons.  Fifth, Europe had a long and bloody history that saw kingdoms and noblemen attack each other.  Pope Urban II’s call for a crusade was an attempt to end aggression between European kingdoms and instead direct the violence towards Muslin-held areas in the Middle East.  In general, the main causes of the crusades combined and led to the several different waves of the crusades that followed.  However, Pope Urban II’s Council of Clermont speech is considered to be the spark that inspired many to take up the mission and was a cause of the crusades.
​

In reality, there were many different crusades.  Historians disagree on the exact number but in general, there were nine main crusades and many other smaller ones which occurred over a period of two centuries.  The first crusade began in 1096 CE following the Council of Clermont speech by Pope Urban II in 1095 CE, which was discussed previously.  During the First Crusade, which took place from 1096 CE to 1099 CE, thousands of Europeans migrated from Europe to the kingdoms of the Middle East.
The first example of this is referred to as the People’s Crusade and took place from April to October of 1096.  During this event, European peasants attacked and killed populations of Jewish people in Europe before finally travelling to Anatolia (modern-day Turkey) where they faced off against Muslim Turks.  They were eventually defeated by the Turks, but set the stage for the crusades that followed.  For example, the first official crusade (meaning it was supported and led by the Catholic Church) began soon after in 1096.
This first official crusade saw European nobles, knights, and peasants travel by land and sea to the Middle East in an attempt to free the Holy Land from Muslim control.  During their travels, the crusaders followed a path that thousands of others would follow in the decades and centuries that followed.  For instance, they first made their way to the city of Constantinople (modern-day Istanbul), which was the capital of the Byzantine Empire, before finally attacking into the societies of the Middle East and the Holy Land.  On route to Jerusalem from Constantinople, the crusaders captured several key territories which they later turned into ‘crusader states’.  These states were controlled by the crusaders for their benefit and used as a way of carrying out further attacks in the Middle East.  The main crusader states established at the time were:  the County of Edessa, the Principality of Antioch, the Kingdom of Jerusalem and the County of Tripoli.  All of these states are in the area of the Eastern Mediterranean and were vital routes towards the Holy Land for European crusaders.
​The fighting of the first crusade continued until 1099 and saw the European crusaders face off against the Muslim fighters in a series of brutal battles.  Eventually, the crusaders captured Jerusalem in July of 1099 and immediately slaughtered many of the Muslims and Jewish people living in the city.  This victory served as inspiration for the crusades that followed, but in reality, Jerusalem and the Holy Land changed sides many times throughout the two centuries in which the crusades took place.  As stated previously, several other main crusades took place in the decades and centuries after the first crusade and continued until 1272 when the crusades finally concluded.

​Historians agree that there were approximately nine main crusades that occurred from 1095 until 1272 CE, with each crusade consisting of different motives and goals.  Furthermore, the first four crusade were the most involved and the ones which are most often referenced or discussed when learning about the Crusades.  Click on the links below to read more detailed information about each of the other Crusades.

THE BATTLE OVER JERUSALEM

WHY DID EUROPEANS PARTICIPATE IN THE CRUSADES?

The European crusaders participated in the crusades for several key reasons.  First and foremost was the religious faith of the participants.  They were devout Catholics and wanted to be faithful to the church.  When Pope Urban II called on Europeans to free the Holy Land from Muslim control in 1095, thousands of European Christians took up the mission.  At the time, it was not common for people to question the church or religious faith and as a result many joined the crusades in order to carry out their religious duty.  The second reason for European participation in the crusades was that they believed that by participating in the fight they could be forgiven for their previous sins.  In fact, the Pope promised forgiveness for past sins and as a result many of the first crusaders believed that they would ascend to heaven soon after capturing Jerusalem.  Third, the crusades were a convenient distraction for many peasants from the harshness of daily life under feudalism.  Under feudalism, peasants worked or farmed tirelessly and their taxes were used to pay for most activities in society.  The mission of the crusades offered the average peasant an escape from this reality and allowed them the ability to fight shoulder-to-shoulder with others towards a common goal.  Fourth, the crusades gave those participating an opportunity to go on an adventure to a faraway land.  In the time of the Middle Ages, most people were born, lived and died in the same relative area.  The crusades offered people the ability to travel to a distant land and interact with other people.  Many Europeans enjoyed the adventure of the crusades.  Fifth, many of the nobility and peasants from Europe participated in the crusades because they believed that they could obtain fortune for themselves in the wealthy Middle Eastern civilizations.

​IMPACTS OF THE CRUSADES

​As such, when European crusaders came into contact with Middle Eastern peoples they were exposed to new ideas and inventions which eventually made their way back into European society.  For example, the Europeans learned new understandings about mathematics from Middle Eastern mathematicians who were by far the most advanced at that time.  Also related to knowledge, the different societies involved in the crusades were exposed to each other’s culture.  This meant that each side learned new understandings about food, cultural practices and celebrations. 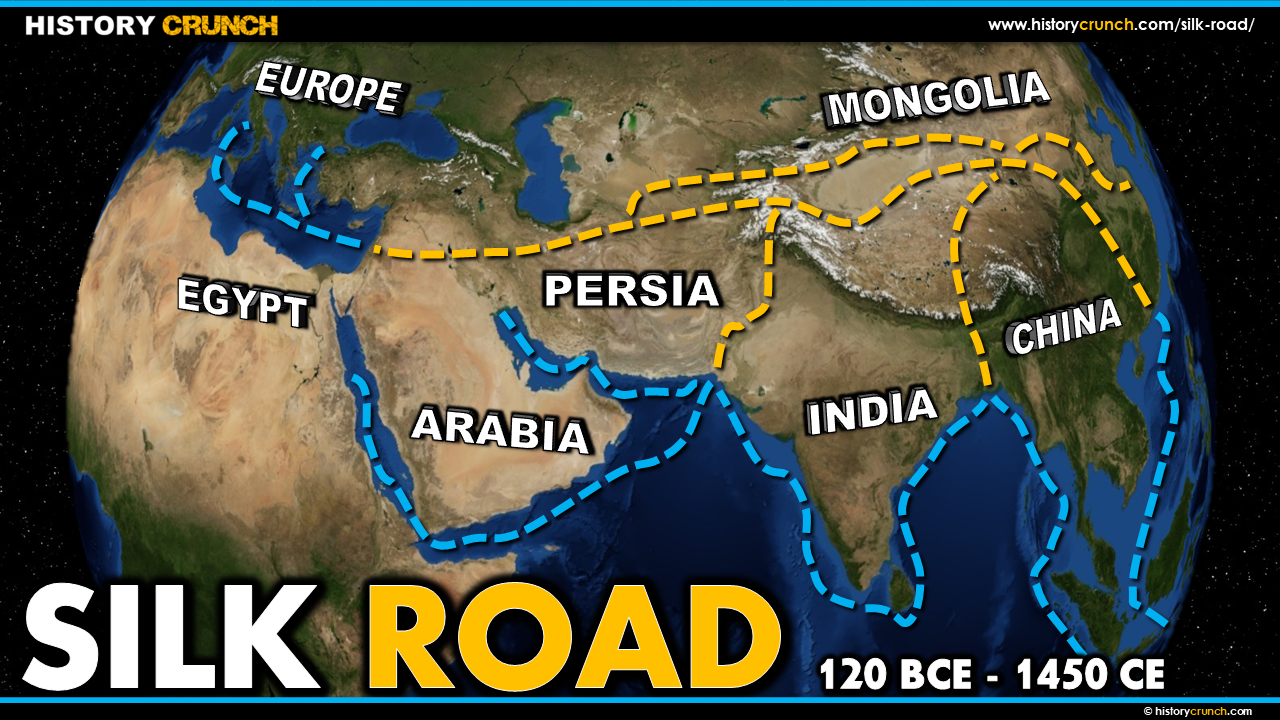 Silk Road Map (Click to Enlarge)
Another major impact of the crusades was the effect it had on trade.  The pilgrimage of thousands of Europeans to the Holy Land created a need for new routes for supply shipments to feed and arm the crusaders.  As such, towns and cities grew in size along the route to the Holy Land with many shops and markets.  As well, port cities in Italy grew in size and wealth as merchants worked to meet the needs of travelling crusaders.  In fact, some of these cities grew to such prominence that they became the famous city-states of the Renaissance centuries after.
A third major impact of the crusades was the effect it had on the role of feudalism in the lives of Europeans.  Feudalism was a form of government common during medieval Europe that involved society being structured in a very rigid and hierarchical way.  It was popular in European society from the 9th century until the 15th century and was the form of government in which the country was dominated by an absolute monarch, in which all power was held within a single king.  The monarch would rule over the country while the rest of the people were bound by a hierarchical system in which people were placed into classes in which they were born.  Due to the crusades, thousands of nobles and peasants left Europe in order to ‘take up the cross’ in the Holy Land.  This meant that large populations of people left their land to fight and since feudalism was centered on the principles of land ownership and farming, this caused feudalism to lose its significance in European societies.  As well, the increase in trade at certain ports and towns led to the rise of a merchant or middle class.  This meant that peasants were able to build up small fortunes for themselves through trading.  As a result, the feudal system began to lose its hold on society which eventually led to the ideals of the Renaissance and the emergence of powerful city-states instead of absolute monarchs.  In all, the crusades had a profound impact on the world, but especially led to changes and advancements in Europe.
In conclusion, the crusades were a vitally important event to European and Middle Eastern History.  They were centered on a clash between different religions and helped transform Europe and the Middle East during the years of the Middle Ages.  As well, many historians consider the effects of the crusades as an important event in the emergence of the Renaissance in Europe a few centuries later.

Europe Before the Renaissance - PowerPoint with Notes Copy