NATIONALISM AS A CAUSE OF WORLD WAR I

Nationalism was one of the main causes of World War I, which began in July of 1914, following the assassination of Austrian Archduke Franz Ferdinand.  In fact, historians consider it to be one of four main long-term causes of the war, along with: militarism, alliance systems and imperialism.  Nationalism was a particularly important cause of World War I due to several key factors.  For instance, it caused nations to build up their armies and led to increased militarism.  As well, it created extremely high tensions in Europe in the decades before the outbreak of the First World War.  This was especially present during the Balkan Crisis before World War I.  Finally, nationalism was an important factor in why so many volunteered for the war and fought on the front lines.
​

The 19th century was a period of continuous change and competition in Europe.  Not only was it the height of European imperialism, but it also saw the rise of nationalism, which swept across the continent.  In general, nationalism is the idea that people identify with one another based on different values, beliefs, and cultural traditions.  For instance, both Germany and Italy formally unified as countries in 1871.  In both cases, smaller kingdoms unified into one larger country and saw the people of each country identify with each other nationalistically.  As such, nationalism played a significant role in carving up Europe between different groups of people.  This created situations in which certain nations disagreed and did not trust each other to an extremely high degree.  As well, some nations felt threatened by the nationalism of other nations, which led to several different crises.​
Every European nation experienced a growth in nationalism in the lead up to the 1914 outbreak of World War I, but some experienced it more than others.  For example, the effects of nationalism were especially present in the Balkans and led to the Balkan Crisis. 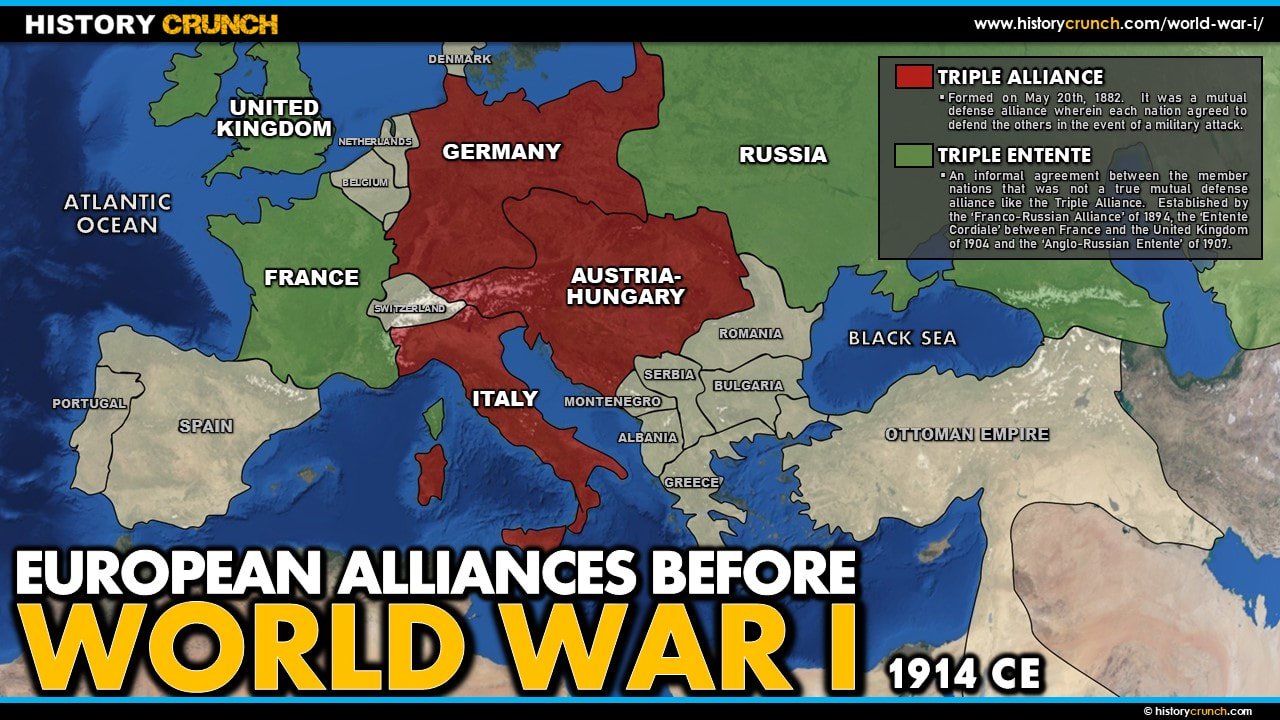 Alliances Before World War I Map (Click to Enlarge)

Austria blamed Serbia for the assassination, since Ferdinand was murdered by Gavrilo Princip - a Bosnian nationalist and member of the Black Hand.  The Black Hand was a secret organization aimed at promoting Serbian (and Slavic) nationalism, and assassinated Ferdinand in protest of Austria’s influence in the Balkans.  As such, this displays that World War I was a direct result of the growth of Balkan nationalism.​

MILITARISM IN EUROPE WORLD WAR I

At the outbreak of fighting in 1914, France had over 1 million soldiers while Germany had over 2 million.  The buildup of these armies was directly related to nationalism because each nation was compelled to protect themselves amid the growing nationalistic tensions of the time.  Ultimately, the arms race showed the distrust between the nations of Europe and when World War I began in 1914 it allowed the countries to go to war more easily.
​

HOW DID NATIONALISM CAUSE WORLD WAR I?

As shown by the information above, nationalism played a very significant role in the eventual outbreak of World War I.  This is because it caused tensions and unrest to grow in certain parts of Europe.  For example, the Austro-Hungarian Empire was not made up of one single nation, but rather consisted of many different groups.  Many of these groups sought to have control over themselves and wanted sovereignty from the rule of the Austro-Hungarian Empire.  This created a great deal of unrest in the empire.  This was especially apparent in the Balkans, which underwent the events of the Balkan Crisis and what historians refer to as the ‘Balkan Powder Keg’.​
Ultimately, the assassination of Austro-Hungarian Archduke Franz Ferdinand in June of 1914 was the spark that lit the match of the Balkans Powder Keg and plunged Europe into World War I.  Nationalism as a movement in Europe in the years before World War I, created the tensions necessary for a small event like the assassination of Franz Ferdinand to explode into the worldwide conflict that it became.